Finally the great news you and especially me have been waiting for since May: From February 1st 2011 I will officially be a KU student. Again. After some anxious minutes I got a pre-email confirming my admittance last week Thursday but I did not want to say anything until I was able to hold the official letter in my hands. And the letter now finally came today (why is it that Danish mail always takes so long?)… 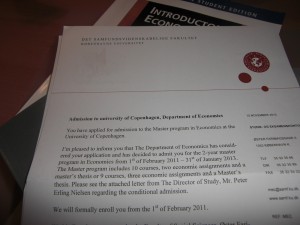 But let me explain about the anxious minutes. Another exchange student from last semester also applied for the Masters as he as well has a Danish girlfriend. He and Christoffer were constantly writing with the administration office about when we would finally hear if we are in or not. Last Thursday (or Wednesday as his place as he is from Columbia) he wrote a facebook message to Christoffer as he had heard that the letters had been sent. I got so crazy and Christoffer knew I would not be able to relax for one minute until he found out more. So we looked up the name of the woman who was in charge and he called her. She was kind of confused about the “the letters had been sent”-rumour as she had put the letters into the mail only about five minutes ago. But when Christoffer explained why he knew things cleared up: apparently International students got an email in advance before their letter and European students got the letter only. Christoffer convinced her to write me an email as well and five minutes later I finally had my long waited for answer: I was in! I could not (and still cannot) wrap my head around it. All this waiting, frustration, hate, anxiousness, etc. etc. etc. is finally over. Now I only have to pass my last exams and all is good.

I finally was able to organize the more important things like writing to my land lady, taking care of my cell phone contract, several insurances, and so on. I will send most of the necessary letters tomorrow, will do the rest which I can do at the moment next week, and I am good. I even already booked the minivan for the trip. Now I only have to wait, start packing, study, run some more errands, and before I can see I will be back!

Exiting times are lying ahead of me!

Wedding Wednesday – How to find YOUR location