So I finally though it is time to show you the Tarte Amazonian clay 12-hour blushes, which I bought when I was in Florida in November. I had several of the blushes on my shopping list but was unfortunately not able to get them all. 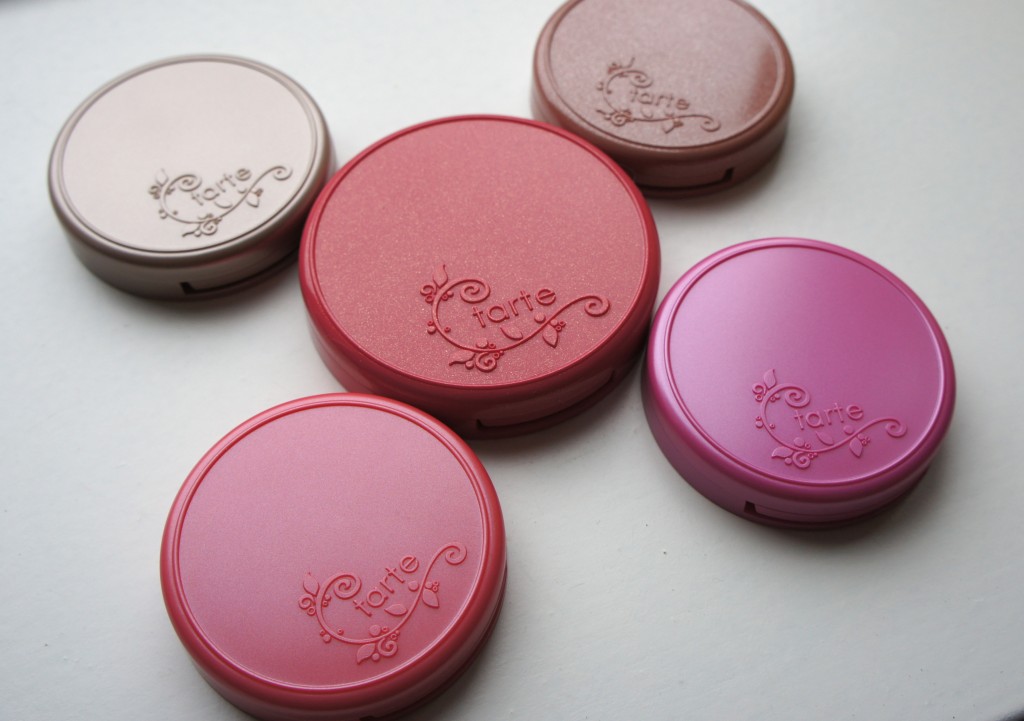 On the other hand they had some of the 4-in-1 sets left, meaning four mini blushes, which came in a pack. And as we do not have Tarte blushes in Germany or Denmark, I took my chance and grabbed them. 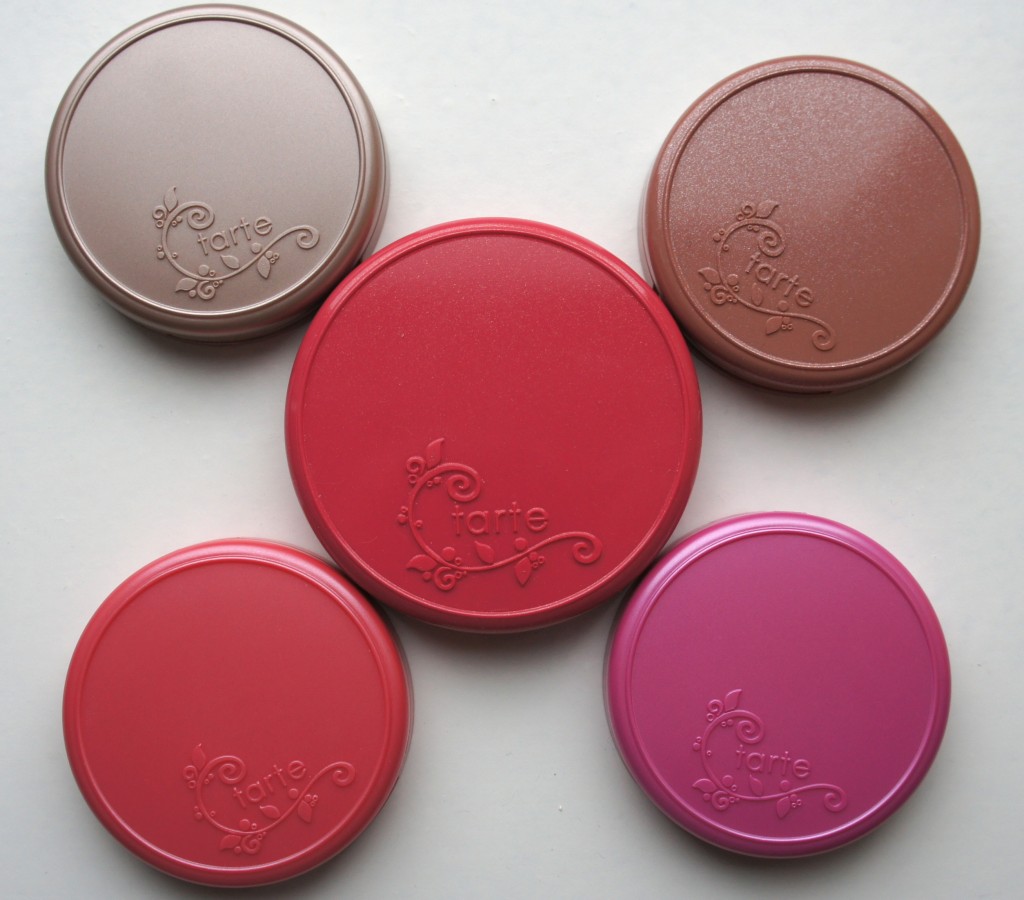 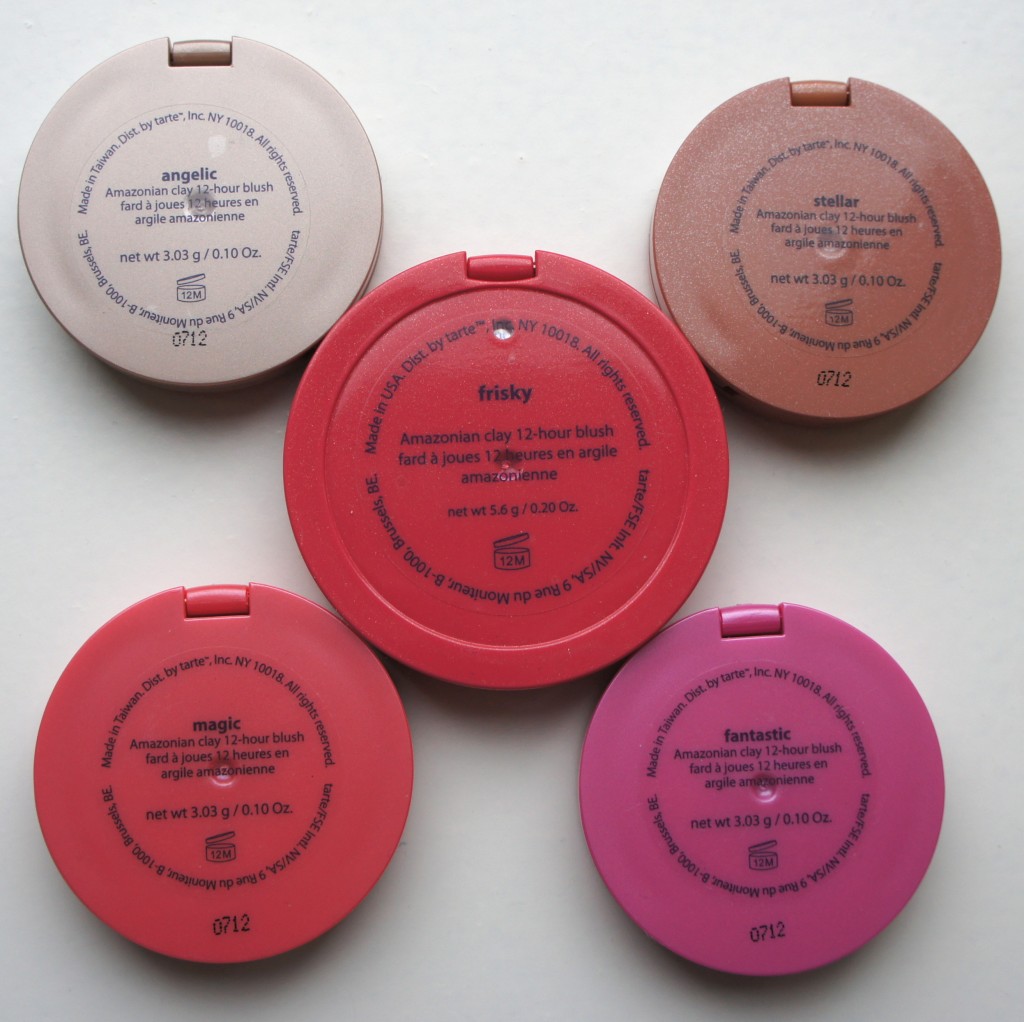 Frisky is the only full-size blush I was able to get (there were of course others available but they for some reason did not attract me as much). Frisky is a quite bright color in the pan but shows up very naturally on the cheeks. It is matt and glittery at the same time (the product itself is matt but with clearly visible pieces of glitter inside). Even though it does not look like it: I have been using this blush a couple of times already. 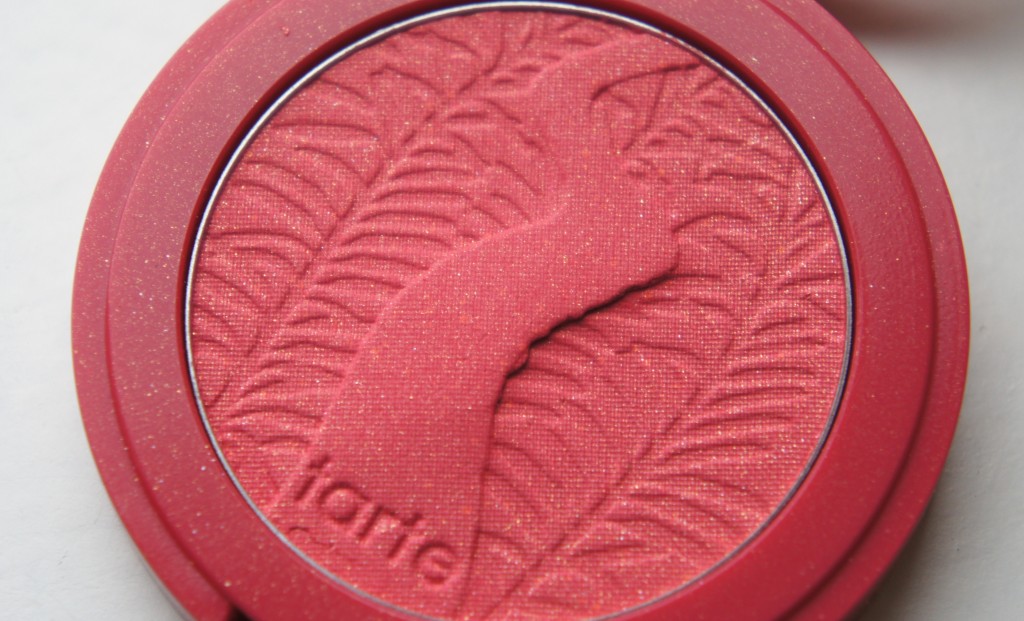 The other four blushes I got came in a set and are significantly smaller than the original size blushes. But as someone owning quite a few blushes I do not mind that at all (I would rather take lots of products in smaller, and therefore cheaper, sizes to be able to try out more products). The smaller sizes also come without a mirror, though I also do not think that this is a down point. The colors from the set also seem to either be limited colors or were out-listed (at least I could not find them on the Tarte homepage). 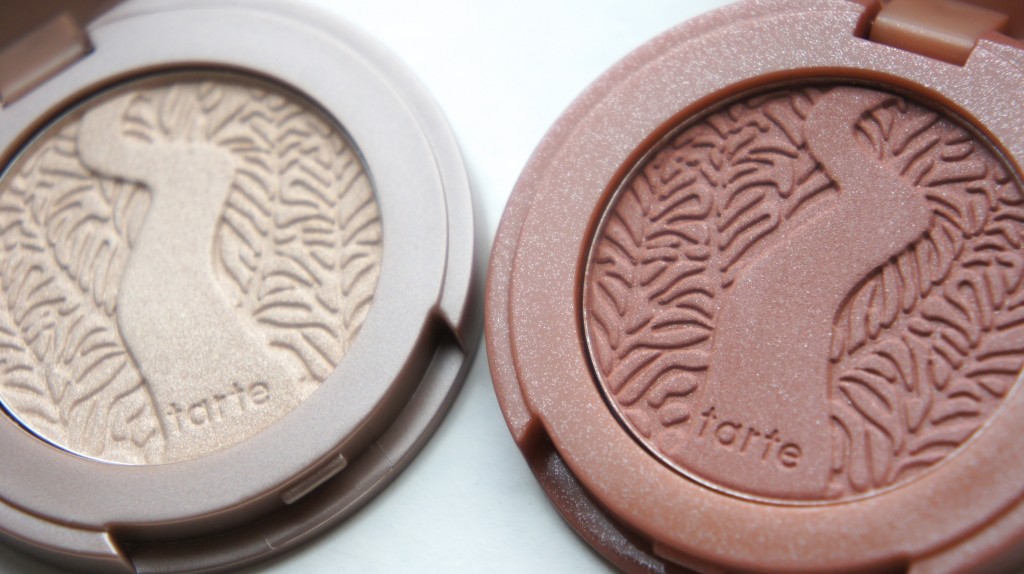 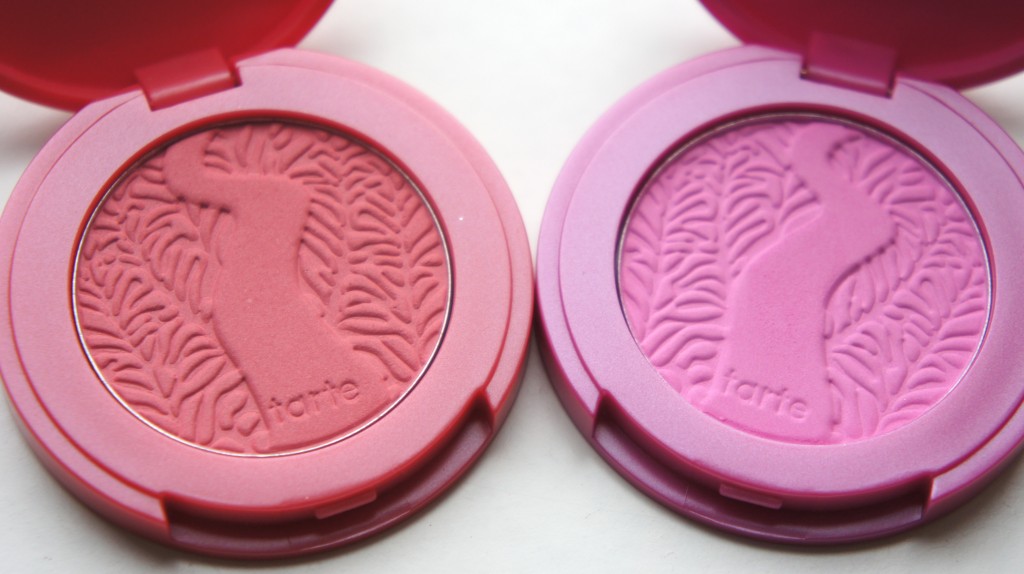 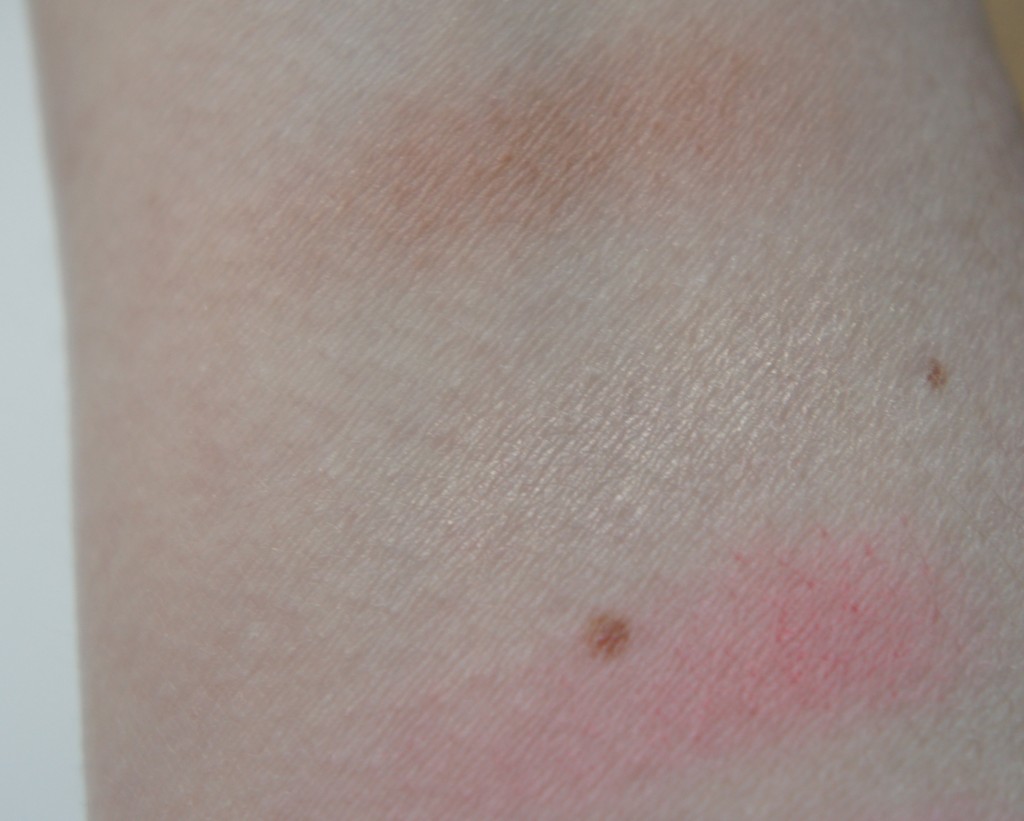 So how are the colors in detail? I tried to make some swatches on my arm. The deeper the color the easier it shows on my arm. The lighter colors (angelic & stellar) however do barely show up on my arm. I have to admit that I did not really try them out before I took the pictures, because I just did not have the time or did not think of it when I had the time and especially in the morning when I have to be quick I do not want to end up with a blush disaster in my face 🙂

Angelic (underneath the top color, barely visible) is more of light highlighter and now that I actually swatched it I will soon try it out. I think Stellar (top color, quite brownish) on the other hand might be used as a contour powder if it fits your skin.

Magic is the bottom color on the picture above and the top color on the picture below. It is a nice mixture between red and pink and works very well with all kinds of skin tones and also different lipstick colors. Fantastic is a very bright pink, which is almost a bit neon. Definitely an amazing color but also a color to watch out when applying.

Last but not least we have Frisky, my main product. It is definitely a reddish blush and even with the glitter in it, it looks very natural and I like to use it when going for a natural “flush” of red in my face. 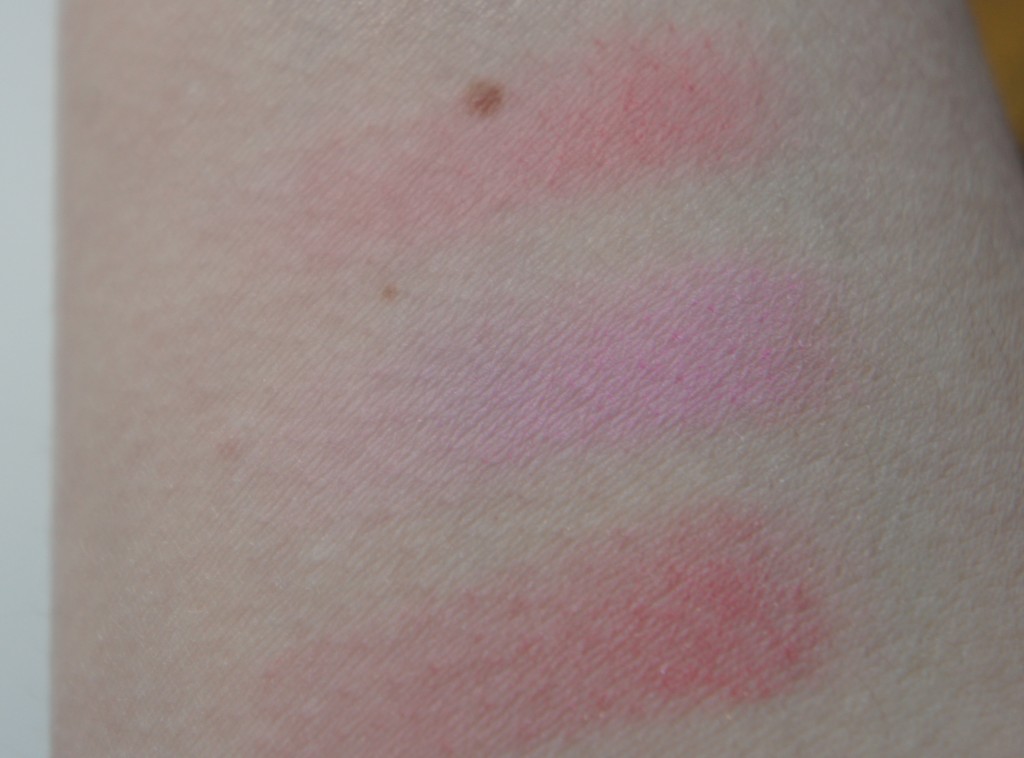 Even though the colors are all quite buttery they do not show up too much on the skin and it takes a few layers to get the result you can see on my arm. I think when it comes to blush this is not a bad thing at all as it definitely helps avoiding over-blushing!

Do you have any Tarte blushes and what do you think of them?